With the unveiling of the new Earth System Governance Project Science and Implementation Plan at the 2018 Conference in Utrecht, RE-IMAGINE finds itself at the centre of the new theme “Anticipation and Imagination”. The conference allowed the RE-IMAGINE team Karlijn Muiderman, Joost Vervoort, Aarti Gupta, Maliha Muzammil and Charlotte Ballard to promote and explore the theme, while introducing and updating colleagues with RE-IMAGINE’s progression over the past year. 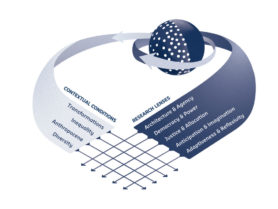 A new, ambitious Science and Implementation Plan for the Earth System Project was launched at the 2018 Utrecht Earth System Governance Conference. The plan aims to inspire and guide research in the years to come, with a new leadership team to oversee the implementation of this new research agenda.

Anticipation and Imagination is a core theme in the plan, with both Aarti Gupta and Joost Vervoort central to its development – Aarti as one of five Coordinating Lead Authors, and Joost as a Lead Author. The plan states that “Increasingly, earth system governance includes proliferating processes of anticipating and imagining diverse futures, including, among others, through modelling, integrated assessments, foresight and scenario building. There is an urgent need to examine how to govern such diverse anticipation processes, but also to scrutinise how anticipation itself becomes a site of politics and governance”.

Aarti Gupta, one of five Coordinating Lead Authors of the Earth System Governance new Science and Implementation Plan, seated second from left at its official release at the 2018 Conference.

RE-IMAGINE, an ESG-affiliated project funded by the BNP Paribas Foundation, thus finds itself in the centre of the Anticipation and Imagination theme. RE-IMAGINE seeks to critically investigate foresight as a climate governance intervention by trying to understand how different conceptions of the future that are implicit to the different ways foresight is used impact policies made in the present. As foresight is being increasingly used in the world’s vulnerable regions in planning for futures under climate change, understanding the politics within these processes will reveal important insights into the ways in which future scenarios can lead to appropriate and effective modes of governance in these regions, and serve as useful decision making tools.

The conference was immediately preceded by the Utrecht Winter School on Earth System Governance, which was co-organised by Joost Vervoort and Charlotte Ballard. Attended by 40 early career researchers from all over the world, Joost kicked off the five day intensive workshop with a scenarios exercise. The theme Anticipation and Imagination is arguably the most unfamiliar new theme among early career earth system governance researchers. The exercise gave participants hands-on experience with a practice embedded in the theme, while letting them explore the only-just-released new Science and Implementation Plan.

With a basis for grappling with the Anticipation and Imagination panel, participants were then treated to complementary talks by Maarten Hajer (Urban Futures Studio, UU), Aarti Gupta (WUR), Roy Bendor (TU Delft) and Joost Vervoort. 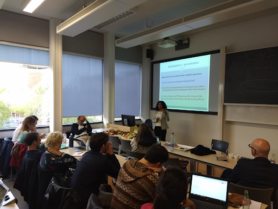 Aarti (pictured left) explored the idea that authoritative scientific assessments, for instance of climate engineering technologies and measures, can in fact be seen as de-facto governance – influencing more formal governance processes. Maarten engaged the audience with futuring work done by the Urban Futures Studio that goes beyond normal ‘foresight’ approaches and aims for much broader societal futuring. Roy questioned how designers are implicated in future- or world-making, and how the designerly imagination may influence collective social imaginaries.

Joost first used his work with the CCAFS Scenarios Project to explore how scenarios can be used to create policy that is robust in the face of uncertain futures. He then moved on to the role of RE-IMAGINE in investigating the politics of such foresight processes as climate governance interventions. 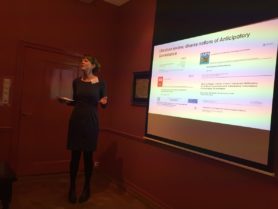 Karlijn Muiderman presented the findings from RE-IMAGINE’s soon to be published conceptual framework. Through this session Karlijn was able to strengthen RE-IMAGINE’s theoretical basis through feedback from a diverse audience of anticipation and imagination experts. The journal paper is expected tobe submitted early in the new year.

Innovative Session on climate governance in the world’s vulnerable regions

On the final day of the conference, RE-IMAGINE researchers ran an Innovative Session on climate governance in the world’s vulnerable regions. 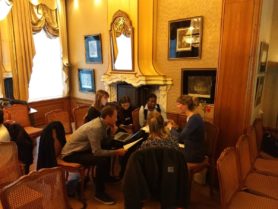 oresight experts attending the conference were invited to explore cross-regional similarities, differences and connections; and recommendations for improving the RE-IMAGINE’s anticipatory governance framework. Insights from the discussion were harvested and will be integrated into RE-IMAGINE’s upcoming regional papers. Read more.

The team is currently working on publications that will apply the RE-IMAGINE theoretical framework to its four global regions. In four upcoming papers, we comparatively analyze how different anticipatory processes inform policy-making on climate adaptation in West Africa, Central America, South Asia and Southeast Asia. Each paper will analyse over 30 individual foresight processes. You can read more about West Africa regional study here.

Recommendations from these analyses will be used to strengthen anticipatory climate governance in the regions through a series of capacity-building meetings with key experts working on the foresight-policy interface, both at the national and the regional level, aiming to be a chain of interventions towards institutional change.