Applying the anticipatory governance lens to practice: the case of the CCAFS scenario-guided policy review in Burkina Faso 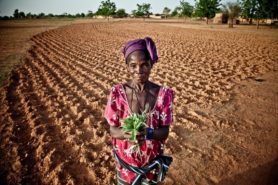 For an upcoming paper, RE-IMAGINE researcher Karlijn Muiderman is analyzing processes of climate adaptation though an anticipatory climate governance lens. One selected case is a CCAFS foresight process in Burkina Faso in West Africa, which was also co-led by Utrecht University. Until now, such foresight processes have, for the most part, not been analyzed from a governance perspective – a clear research gap. Preliminary findings from RE-IMAGINE already demonstrate the added value of critical social science perspectives on processes of anticipation, particularly in more vulnerable regions.

While we are not certain what a future under climate change will look like, we know that countries such as Burkina Faso are highly vulnerable to its impacts. Future scenarios and other foresight approaches are increasingly used by a wide variety of actors all over the world to engage with possible futures under climate change.

One such process is the CCAFS Scenarios process involving the PNSR, the National Plan for the Rural Sector of Burkina Faso (2016-2020). This policy was set out to “ensure food and nutrition security through the sustainable development of a productive and resilient agriculture, fisheries, and wildlife sector that is market-oriented and able to respond to the major challenges of rural development.”

A scenarios process was run by the CCAFS scenarios team (led by Lucas Rutting) based at Utrecht University and involved national experts and policymakers who tested the plan against diverse socio-economic and climate scenarios up until the year 2050. It aimed to sensitise the plan to future uncertainties, and led to 22 recommendations that were translated into concrete climate change and climate-smart agriculture actions and integrated into the plan.

However, processes like these have not been analyzed on the politics of such engagement with the future. The future is an open but not a neutral space – many actors are projecting their interests into the future. So whose ideas on the future determine the actions being taken in present? Whose ideas matter? Who is involved? Who is excluded? Are conversations about climate futures happening at the right time vis-a-vis policy and decision making, and what types of methods and scientific approaches are being used to think about what the future may bring?

The Re-imagining anticipatory climate governance in the world’s vulnerable regions (RE-IMAGINE) project, sister project of CCAFS Scenarios, asks these questions in four vulnerable regions: West Africa, Central America, Southeast Asia and South Asia. A publication is in the making for each region.

In a session at the Earth System Governance Conference, held in November, the RE-IMAGINE team also discussed the preliminary findings of each region with foresight and governance scholars with expertise in the regions in order to strengthen our research framework, which can be read here.

Analysis of over 30 foresight processes in West Africa

In the upcoming paper, Karlijn Muiderman analyzes and compares how anticipatory processes inform decision-making on climate adaptation in West Africa. One of the cases is the work of the CCAFS Scenarios project in Burkina Faso. The paper analyzes this CCAFS case together with 30 other cases in order to learn from what is happening in the region.

A policy review of these cases illustrates that many different forms of anticipation are currently applied in the West African region, with large differences in how they connect to policy cycles. Policies often state that participatory approaches such as the CCAFS process are crucial in exploring climate futures in order to account for uncertainty and complexity and develop inclusive strategies.

So far, however, quantitative scenarios with narrower framings of future uncertainty are much more common. Such scenarios are seemingly considered to be more neutral and objective, and therefore more more appropriate to guide decision-making. At the same time, participatory foresight approaches seem to be more successful in including policymakers early on in the design of their process and include stakeholders beyond a narrower range of scientific and political experts.

A series of in-depth interviews with policymakers and anticipation practitioners is currently being undertaken to further explore these findings.

The paper will draw recommendations on how foresight approaches can play a role in appropriate and effective modes of anticipatory climate governance in the world’s most vulnerable regions.

Recommendations from the analysis of the CCAFS case and 24 others will be used to strengthen anticipatory climate governance in the region through a series of capacity-building meetings with key experts working on the foresight-policy interface, both at the national and the regional level, aiming to be a chain of interventions towards institutional change.

Similar meetings will be held in RE-IMAGINE’s other regions (Central America, South Asia and Southeast Asia), building on analysis of both CCAFS and non-CCAFS regional foresight processes.